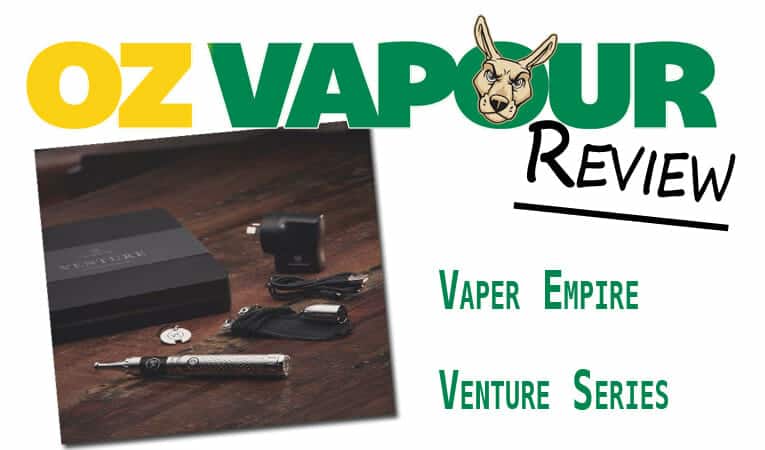 The Venture Vapour Pipe is Vaper Empire’s flagship model, and my personal favourite out of the impressive list of mods they sell.

It is a sleek tube type of mod that not only works great, but is extremely rugged, but at the same time looks absolutely gorgeous; simple yet elegant.

There are several varieties of tube mods; the most common being the fully mechanical types which are simply tubes with a 510 connector and a switch. You will need to supply your own battery and charger for them, and they are also more dangerous as they are unprotected.

Another type is the regulated tube mod, where a controller chip allows you to choose the voltage/wattage/temperature at which you vape; these are varied in design and usually incorporate charging circuits allowing you to charge your batteries, as well as providing protection from hard shorts/reverse battery placement. They may have external or fixed batteries.

And falling into the last category is the Venture Series From Vaper Empire…..

In between the first two types are the semi-mechanical tube mods, where the battery voltage is unregulated but the mod still has short circuit and low voltage protection – it will still provide protection in case of shorts and  incorrect battery placement, as well as preventing batteries from draining too low. They usually have an internal charging port as well.

What’s In The Box

The kit comes with  one gorgeous Venture Battery (rated 1500 mAh), one proprietary Clearomiser with a coil already inside, one Coil Replacement, a USB Power Cable and an English user manual.

What caught my attention when first receiving this kit is the exquisite packaging. I don’t usually care about how things are packed; even if it came in bubble wrap and newspaper I would be perfectly fine with it as long as the stuff inside isn’t damaged.

The beautiful black aluminum box is a nice touch though, and shows that a lot of effort has gone into each and every one of Vaper Empire’s products.

The Venture Battery itself is astounding. Holding it up for the first time, what really made an impression on me is how solid it seemed; it is surprisingly heavy for something of that small, yet it feels good in the hand.

It isn’t too heavy that it would be uncomfortable bringing it around in your pocket. The finish is a gorgeous stainless steel with a stippled texture design, making it very grippy despite being so smooth. It looks fantastic to say the least! It is elegant, in a rugged sort of way.

I can tell this is something that will last quite a while, despite rough handling and daily use.
Near the top of the mod you have the firing button, which not only lights up when you press it, but also has a 5-click on/off function.

This is definitely a plus, especially for people on the go; you can simply throw it in your pocket and won’t have to worry about accidental misfires ruining the battery or melting atomizer insulators.

The tactile feedback is very soft but clicky – it only takes about 100g of force to operate, and the large surface area of the switch (almost 1cm) ensures that it is a very comfortable experience, unlike the popular domed tactile switch which likes to leave indentations on the thumb along with a bit of pain when in heavy use.

This potential problem is easily remedied by removing the clearomizer when charging – it isn’t really that big of an issue, merely personal preference.

That said, I have never had any problem with the venture leaking in the past few weeks, whether it is kept upright or not.

The micro USB socket is extremely durable, and has no play whatsoever. It gets fully charged in less than 2 hours.

To charge, you simply plug the mod to a USB port with the supplied cable. It glows red when charging, and green when it is done.

The connector for the clearomizer is not the standard 510, which means that your choice will be limited to the proprietary clearomizer that Vaper Empire sells.

This is actually a bit of a disappointment, since I would have loved to try out different cartomizer/atomizers on the Venture – it would look absolutely stunning with a small carto tank.

That said, the connector itself is ingenious.

There are no threads, and you slide the cartomizer directly onto the little shaft, and it is held on by o-rings inside the clearo.

When the clearomizer is latched on, it is surprisingly secure; the connector will even support the weight of the battery if you hold it by the clearomizer, and no amount of shaking will dislodge it.

I have yet to have it come apart in the few weeks I have used it. A distinct advantage to this style of connector is that there are no threads to ruin when you over tighten connections, which is rather common with softer metals like brass (most eGo-type devices have connectors that are chrome plated brass).

This type of connector will long outlast the lithium battery inside. It would be awesome if Vaper Empire would make other atomizers that would be compatible with it.

As for the battery life, a single charge  will last roughly around 2 days of moderate use. It is reliable and does not get warm even when chain vaping.

The clearomizer that comes with the Venture is performs surprisingly well. The heating element is near the mouthpiece, giving a very warm vape for a high resistance coil. The airflow is very restricted, and is close to a real cigarette draw.

If you like big lung-hits and wide open airflow, then you might not like the venture; however for vapers who enjoy a cigarette-like draw and intense flavour (like me), this is absolutely perfect. Looking inside, it appears to use 30 or 32 gauge kanthal wrapped on to silica wick.

The coil and wick is very clean and does not need cleaning prior to first use like some cheaper pre-made coils.
The coil head (which contains the heating element) is replaceable – the Venture kit came with a spare, and Vaper Empire also sells the replacements separately.

With moderately heavy use, you can expect over two weeks out of each coil head before flavour and vapour production suffers.

If you dry burn and wash the coil heads out (many videos on Youtube on how to do this), it will further increase the lifespan of the coil heads. The clearomizer’s window is a very dark glass, which allowa you to see the liquid inside.

It looks really good, but because of the colour, it is difficult to see the e-liquid in low light conditions – which kind of defeats the purpose of having a glass tank. The colouring on the glass in incredibly durable, and I have yet to see any flakes falling off even with the most acidic e-liquid.

Lastly, the mouthpiece is screwed on and not the typical driptip connector.

This means you will not be able to swap out the drip tip for one of your own; that said, the driptip that the Venture came with is perfectly fine – it feels good in the mouth and does not get too hot.

Disassembly and filling is very easy. The Venture kit comes with a small key that you use to unscrew the bottom part of the clearomizer (where it goes on the mod), and gives you access to the coil head for replacement or cleaning.

The coil is simply screwed on, and filling it is identical to how you would go about filling a protank or subtank.
You need to turn it upside down  and fill the upper portion of the tank (the part with the glass), making sure the e-liquid does not go past the level of the chimney.

After filling it up, screw on the bottom part of the clearomizer (the part with the coil attached) and you are ready to vape!

The venture kit also came with a little leather lanyard where you can keep the mod securely. While some people find carrying mods in lanyards a bit tacky, I for one like the convenience.

The lanyard looks very nice, and isn’t uncomfortable at all. Another little surprise that came with the kit is a little disinfecting cap, a little piece of metal attached to the lanyard where you place a bit of alcohol.

To clean the drip tip, all you need is to place it inside the disinfecting cap (naturally, you do this with the clearomizer upside down to prevent any alcohol from flowing inside to the coil) for a few seconds.

Overall, the Venture kit is an excellent choice for vapers who want a high-performance but low-maintenance mod.
It works perfectly out-of-the box, and does not need any tweaking or rebuilding whatsoever to achieve a very solid and dependable performance.