Vaping vs Smoking – What To Expect 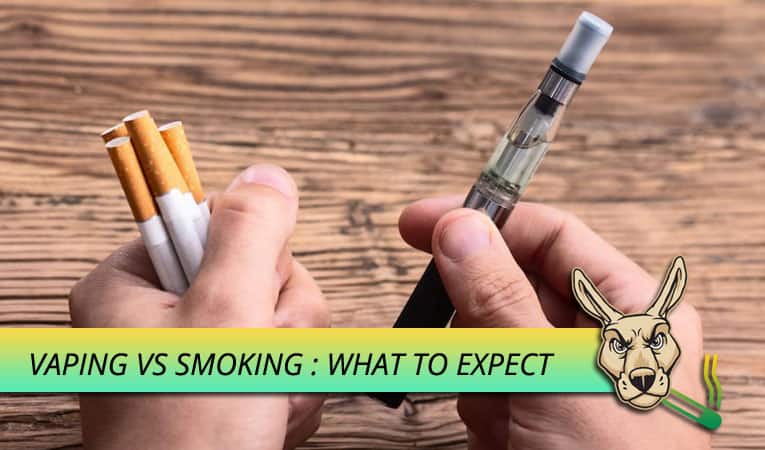 Switching over from smoking to vaping can be more than a little off putting. Depending on how long you’ve been using cigarettes for, it’s going to be as easy as picking a different sandwich, or almost as nerve wracking as your first date.

The transition wasn’t easy for myself, not by any means. That said, a little knowledge can go a long way into mastering your old habits for a newer, healthier alternative.

The comparison between vaping vs smoking is a hefty topic among those of us who made the change. But instead of talking about opinions, we’ll be going over the hard facts of what is different between the two.

For those who are ready to make the switch to vaping, first port of call should be finding a vape device. Read our updated list of the best vape starter kits to find the ideal device for your individual needs.

Smoking, Which Is Healthier?

There are two main schools of thought when it comes to the topic of possible health issues. The main argument against vaping is that smoking has a long history of being studied by researchers, while this newer product hasn’t been around long enough to be as thoroughly picked apart.

On the other hand, we know for sure that there are far fewer harmful chemicals that make up e-liquid. We’ll go a little further into that later, but let’s get the verdict of which is less likely to cause health issues in the long term.

Vaping is safer than smoking in regards to long term health risks, but it isn’t completely risk free either.

It’s basically fact at this point that smoking cigarettes carries significant health risks. While essentially everyone who’s received even the most minimal education knows of the correlation between lung cancer and smoking. Even children are religiously taught that smoking is a horrible and dangerous habit.

The truth of the matter is that smoking affects far more than just your lungs. It basically harmful for your entire body.

In the cardiovascular system alone, you can expect issues such as raised blood pressure, a stressed heart, thicker blood, and fatty buildup on your arterial walls. Basically all of these health issues significantly raises the risk of heart attacks, blood clots, strokes, blood blockages, and even diabetes.

We’re not even getting into all the different types of cancer cigarettes end up promoting. This may just sound like a rehash of what you learned in school, but smoking literally damages a person’s body to the point where your life expectancy is reduced by seven to eleven minutes on average.

Some even studies suggest that it can take up to 20 years for a long term former smokers to regain the same level of vitality as a non-smoker.

While there hasn’t been nearly as much research done on the subject, the broad strokes of the matter is that vaping is a far healthier alternative. That isn’t to say that vaping is completely safe, we’re still inhaling stuff we’re not meant to.

Besides being addictive, nicotine is a drug that raises your blood pressure. There’s no getting around it unless you end up quitting entirely or switching to nicotine free e-juice. And even if you aren’t going to be tarring up your lungs with a vape, some flavourings have been found to carry carcinogenic ingredients.

There is also the problem that vape devices have been known to explode, and can do significant damage to a user if this happens during use. While there is a caveat to this phenomenon in that most battery explosions were caused by improperly built or calibrated rebuildables, it’s difficult to discount that even those vapes without adjustable power settings can have their batteries burn.

For the average vaper who isn’t concerned about building their own device, the risk of explosion isn’t very significant. However, inhaling e-liquid vapor is still something that probably increases the risk of future health issues.

Besides scarring up your lungs with tar, cigarettes contain hundreds of different chemicals that include arsenic, rat poison, and other dangerous substances. You could fill up several library wings alone with the aforementioned health risks these chemicals can cause.

In comparison, there are generally four different ingredients that make up e-liquid. Nicotine, propylene glycol (PG), vegetable glycerin (VG), and whatever flavourings are added. Of these ingredients, PG and VG are considered to be relatively harmless.

The chemicals that give rise to concern besides nicotine, are the various flavourings. Most of the ingredients used to flavour e-juice is meant to be ingested, not inhaled. There have also been studies done that point towards some flavourings being harmful.

No you aren’t going to get all of these flavourings in a single bottle of e-juice, but this list is more of an example to show that vaping isn’t completely free of risk. It’s still less dangerous than smoking, however. Without beating around the bush, it’s going to be far less expensive for you to buy e-liquid than it is to buy a pack of cigarettes. At around $20 per pack of the cheap stuff, you can easily afford two 120ml bottles of bulk e-juice for around the same price.

The difference? 240ml worth of e-juice is going to last even the heaviest of vapers at least a month of continuous use. A pack isn’t going to last anywhere even close to week even for moderate smokers. That being said, it’s going to cost you a little more to purchase a vape device in comparison to a lighter. Still, most entry level devices of good quality will only cost you $30 or $40 to get started.

Besides e-liquid, there’s another consumable that you have to worry about. For those of you with pen or pod style devices, you’ll have to shell out for proprietary coils or pods for around $15 to $20 per pack of 4-6. It’s still going to be significantly cheaper than buying biweekly cartons for both types of devices, even if non-refillable pods will end up costing you way more than vape pen coils.

If you want to go even cheaper with your overall expenditures, you can look into rebuilding. The startup cost is going to be higher, but a big package of organic cotton and a roll of wire isn’t going to break your bank.

Even better is that said products can last you for half a year or longer. The issue with personally built devices is that you’re going to have to do at least some basic research on how to properly control ohms, resistance, and wattage.

I’ll be straight with you, this is a difficult topic to cover. Primarily because smoking and vaping give very different feelings of contentment. If you’ve been smoking for a long time, you won’t be getting anywhere near the same feeling of satisfaction from vaping as you would a cigarette.

Not at first at least, even if you’ve properly regulated your nicotine dosage to match what you’d get with a cigarette.

Even if vaping e-liquid satisfies your body’s physical craving for nicotine, the change in routine is still going to be jarring enough to cause a sense of dissatisfaction.

While this is mostly a psychological problem caused by a similar, but still unfamiliar habit, a major reason why some smokers have difficulty with switching over entirely is because of this mental block.

You know that you’re getting nicotine, your brain realises the scratch is being itched, but it won’t feel the same. The throat hit is going to be subtly different, vapor in the lungs doesn’t feel quite the same as smoke, and you’ll have a difficult time knowing when to stop vaping at first.

You’ll even have to pull on a vape differently depending on whether it’s meant for mouth to lung (MTL) or a direct lung (DL) style of draw.

The best tip I can give you is to make the vaping experience as similar to smoking as you can for the first two or three weeks. Use a sufficiently high nicotine dosage, get a device designed for MTL drawing, purchase tobacco or menthol flavour e-juice, and even time yourself to coincide with a cigarette break.

Basically, you want to get an experience as close to smoking as possible while remembering why you’re making the switch in the first place.

Whether it’s for health, monetary, or other reasons, keep reminding yourself why you’re moving from smoking to vaping. Sure, you’ll probably crave a cigarette every now and then, but eventually you stop thinking about it.

Given enough time, you’ll probably go back to trying a cigarette and find yourself preferring your vape instead. But to get some more in depth tips on things you should know before you start vaping see our full guide. 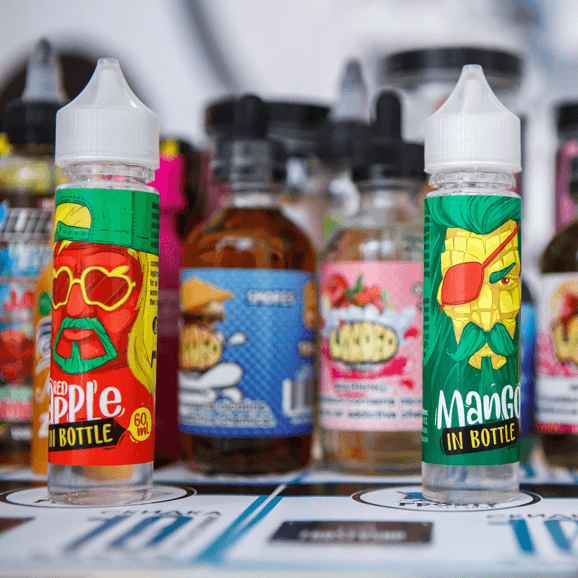 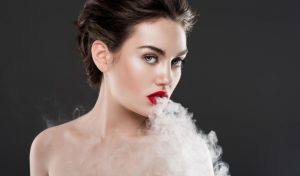 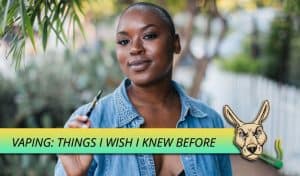 Things I Wish I Knew Before I Started Vaping 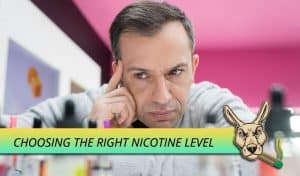 Nicotine Strengths: How To Choose What’s Right For You 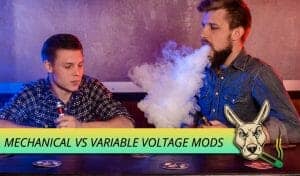 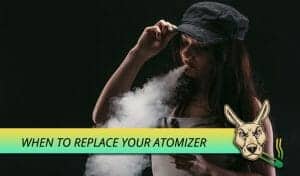 When to Replace Your Atomizer 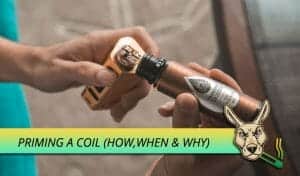 How & Why to Prime a Coil